We were lucky enough on this leg of the journey to have Kristin’s parents, John and Sandy, fly from Denver, Colorado and meet us in Australia! We were able to grab breakfast with them in Sydney before we headed north to Cairns to meet them again and start our dive trip. Cairns is a pretty touristy town that caters to scuba divers and snorkelers wanting to catch a glimpse of the Great Barrier Reef (GBR).

We caught our 3 day, 2 night dive trip out of the harbor in Cairns.  It’s a 3 hour boat ride from Cairns to the GBR and pretty rough so they definitely recommend taking some Dramamine on the way out. Once we got to the GBR we had 3 day dives and a night dive the first two days and 3 dives the last day for a total of 11 dives! The diving in the GBR is pretty easy and shallow since the highlight is the coral reefs and they aren’t very deep. It was also great because the dive company we went with, Pro Dive Cairns, had exclusive access to a few reefs so our group  of 3 had the reef mostly to ourselves. You also got to dive at your own speed because you didn’t dive with a guide and they let you off of the boat with your dive buddy and let you fend for yourselves and navigate back to the boat. As usual my buddy was Dan and he was in charge of the navigating most of the time because I had no idea where the boat was so he got used to understanding my hand gesture of “Where is the boat?” under water.

The coral formations are absolutely stunning. They consist of mostly hard corals and colored stag horned coral spread across the ocean floor.  Another thing unique to the GBR are giant clams that have beautiful bright colored insides. The biggest clam that we saw on our trip was about 4 feet long and 2 feet wide. They are ginormous!  We saw some other large creatures including bumphead parrot fish that were 3 ½ feet long and 2 feet tall and Bryan the large green turtle who we got to visit during one of the night dives.  And I can’t forget the 5 foot long barracuda that was chilling under the dive boat while we were taking our safety stop.

We had some interesting animal interactions during our dives. The most memorable was the cuttlefish that Dan was trying to get to mimic him and when it was no longer interested in playing it changed colors all of a sudden and lunged at Dan’s face. Apparently it was not in the mood to play or it didn’t like Dan who knows. During one of the last dives a smaller reef shark decided it wanted to hang out with us during the dive and we got some great video of it swimming through the coral. A hilarious interaction that we witnessed was one with a pair of triggerfish who were guarding their nest and every diver that swam by was attacked by one of the triggerfish. 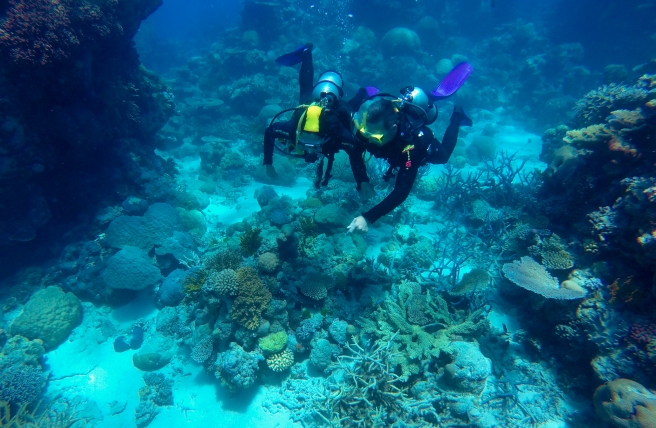 The food on the dive boat was actually really good and the crew was super friendly. We were basically eating, sleeping, and diving so there was not really time for much else. Some entertainment was provided by watching the cook clean dishes off of the back of the boat. During his cleaning 20-30 huge fish would swarm the back of the boat to eat the scraps. They were so close that he was almost able to put one of these huge fish in his salad bowl. At night after dinner not only would these big fish show up the sharks would as well. It was a little unnerving to watch multiple large sharks off the back of the boat while you are getting ready to get in the water for your night dive but we survived.

It was great being able to share this amazing experience with Kristin’s parents and to help them check off diving the Great Barrier Reef from their bucket list.